Find the Best Hearing Aids For You with a Risk-Free Trial Start your no obligation, risk-free trial today
I am planning to: Start Your Risk-Free Trial It only takes a minute
Try the latest hearing aids to experience
Clear Living Hearing Technology
Share178
Tweet
WhatsApp
Email
178 Shares

More and more people are talking about the coming wave of hearing technology, and the inevitable change from wearables to hearables. But the truth is, it's already here. 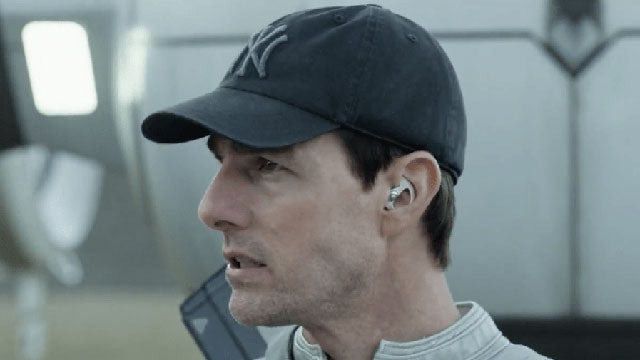 We're going to get into details about literally everything to do with hearable technology, so you can use the links below as a table of contents to each of the major sections we'll cover.

The term hearables is still being shaped because while some do exist in the market place, we are far from saturation. Thus, to some people hearables may just be wireless earbuds with advanced features, but to others it may be more akin to a hearing aid.

A hearable is a wireless in-ear computational earpiece. Essentially you have a micro computer that fits in your ear canal and utilizes wireless technology to supplement and enhance your listening experience. Many hearables will also feature additional features such as heart rate monitoring (see below for a full list).

Fast forward to today and there are two important movements currently happening that are both converging on one another.

First, hearing aid companies are beginning to recognize that users want a device that does more than correct and amplify sound. They want to be able to sync seamlessly with wireless devices such as their smartphone, for telephone calls, music, games, and more.

Second, commercial electronics companies (more specifically headphone manufacturers) are realizing the potential of “bionics,” or creating in-ear buds that measure biometrics, output great quality sounding music, and (this is the newest part) have the potential to amplify sound.

I believe both groups will eventually converge, but it's really a matter of who will get there first. In my opinion, The Big 6 have the biggest advantage because they have been dealing with this technology for decades, and already have the required approval from the FDA to label their devices as actual hearing aids (something most consumer electronics companies can't do by law).

Features and Benefits of Hearable Technology

Many companies are still trying to figure out the niche role their hearable product will play in the marketplace.

Some more traditional headphone companies are caught up in the same race most wearables are: biometrics. While hearing aid companies seem to be ensuring their already functioning technology syncs perfectly with your smartphone for even more user control.

Either way, there are a ton of benefits, but we'll do our best to list and explain most of them below.

As we've mentioned a couple times above, one of our favorite benefits is actually related to perception of ear enhancing devices currently on the market. The advent of hearables is likely to help reduce the stigma of hearing aids and thus help people prevent and improve hearing loss much earlier in life.

Hearables Currently on the Market

Below you will find 3 separate lists of pre-existing devices that are adding new technology to transform them into true hearables:

We update each list on a bi-monthly basis. Some on the list aren't currently available, or may still be in a funding or design stage which you'll see noted in the availability column.

(Note: If for any reason we have left off a pair be sure to contact us or let us know in the comments!)

The devices below are classified as hearing aids by the FDA, with the primary purpose of improving hearing loss. In addition, these hearing aids are also wireless and maintain the ability to sync with smartphones to allow the user more precise control.

You can read more about made for smartphone hearing aids here.

While the FDA currently classifies these devices for non-hearing impaired individuals, many people with hearing impairments do experiment with these devices (typically because they are significantly cheaper). Also, as of October 2015 the President's Council of Advisors on Science and Technology (PCAST) has been looking into ways to allow PSAPs to be marketed to those with hearing loss and to create a new category of “basic” hearing aids meant for sale over-the-counter (OTC).

With that said, it is recommended to consult an Audiologist prior to purchasing a PSAP.

Just to reinforce what we've said above, while these devices are pretty neat, they are not meant to be solutions to hearing loss (that's what hearing aids are for).

If you think that you may need a hearing test, we can help you find a hearing specialist in your local area.

(Note: As we have not been able to test everyone of these devices (yet), they are not listed or ranked in any specific order, however we have reviewed and ranked some of the wireless earbuds here.)

Many popular headphone companies are utilizing current wireless technology to enhance your listening experience, while also adding additional benefits like biometrics. Check out the features column below to see exactly what each device does.

While a lot of these headphones look pretty incredible, we're most excited to see what the rumors from Apple and Samsung end up turning into.

Because the list of headphones with “smart” technology is growing, we've had to split the table into two separate lists:

Augmented Hearing and Other Hearables

Here's what Doppler Labs had to say:

That sounds both crazy and cool.

We've started to notice some of the above hearables are failing to obtain funding, and ultimately cancelling their products. We're going to track those here, just in case you were curious:

In addition to the hearables mentioned above, other companies are out there working on wireless hearing technology that has the potential to revolutionize the hearing market.

Heart Math. According to Heart Math you can “…improve well-being, vitality, clarity of thought, access to your heart’s intuition, and a more balanced response to stress,” via their inner balance sensor.

Zen Sensor. The Zen Sensor clips to your ear and then sends your heart information to your smart device (i.e. iPhone, iPad). The purpose is to understand current information about your heart that can lead you down a path to improve stress.

Valencell. Valencell is one of the leading companies with a patented heart rate monitoring technology. This tech can be found above in the Jabra Sport Plus, LG HRM Earphones, SMS Audio Biosport, and Sony Smart B-Trainer, as well as many other wearable devices.

BitBite. The BitBit utilizes an everyday headset to monitor audio waves while eating and then records what, where, when, and how you eat. This data can then be used to improve nutrition.

Human, Inc. This startup recently raised $5M for a product that for the most part,  is a secret. They have alluded to a feature that may “break language barriers” and create “personal surround sound.” Check out the image below of these somewhat sci-fi stylized hearables.

One of the best ways to gauge the status of the current hearable market is to analyze the patent war that every tech company is always waging.

As of writing this we've probably read through just over 100 patents discussing the potential of hearable devices. For now though we just want to highlight some of our favorites from companies we believe will be the major players.

Apple's patent for “Sports Monitoring System for Headphones” is going to be huge among active users of hearing tech. They are likely going to make a big push into monitoring and measuring biometrics via headphones (likely incorporating their acquisition of Beats). 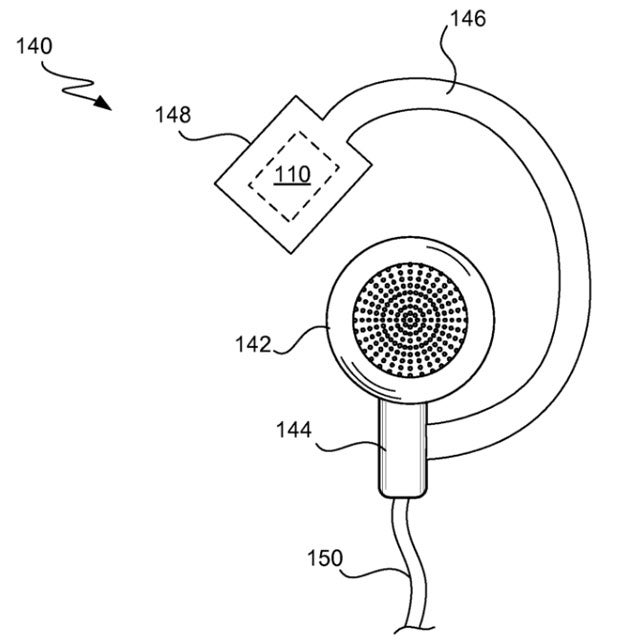 Update 4/30/16: Apple has officially filed a petition to the Federal Communications Commission (FCC) to remove telecoils from future iPhones. If approved, it essentially allows Apple to include proprietary technology in their iPhones (which may or may not function with other wireless hearing aids). This has become a rather sensitive subject in the world of Audiology, so much so that several Audiologists have created a petition against Apple's petition.

Update 6/13/16: Apple's patent for a headset that utilizes bone conduction to improve speech recognition and hearing in the presence of ambient noise, has been approved. We do not know yet how Apple intends to use this device, or what other features it may include. 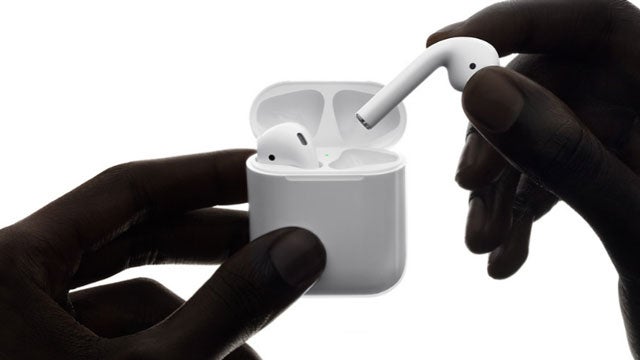 Update 12/13/16: Probably the biggest news of 2016 was Apple removing the 3.5 mm jack and releasing their Air Pods. Unfortunately, they don't really do much…yet. We'll be keeping on eye on them combined with some of the above Apple patents to see if Apple can potentially revolutionize the market in the future.

Update 4/20/17: Will Apple's Air Pods be measuring your vitals soon? Check out the video below to see how Air Pods may be Apple's largest foray into healthcare yet.

Update 6/5/18:  As part of Apple’s iOS 12 software upgrade, AirPods will now have access to the ‘Live Listen’ feature, something that was previously reserved only for Made for iPhone hearing aids. Watch the video below for a quick explanation.

Filed in early 2014, Samsung's “Hybrid Hearing Devices” patent would allow users to use their Samsung device as a controller for amplifying sounds via air conduction or bone conduction.

More recently A New Domain discovered FCC documents and images to suggest Samsung is working on a hearable called the “Earcle” and possibly even a hearing aid.

Update 7/8/16: It's official, check out the image below or take a closer look at the Samsung Gear Icon X, now available.

Oticon is potentially increasing functionality of hearing aid devices with their patent “Sound Simulator for Memory Enhancement.” This would allow an in-ear device to monitor brain waves in order to generate a better output sound.

Even though many dubbed 2015 as the “year of the hearable” we're still in its infancy according to WiFore. Just check out this market prediction graph by Nick Hunn. 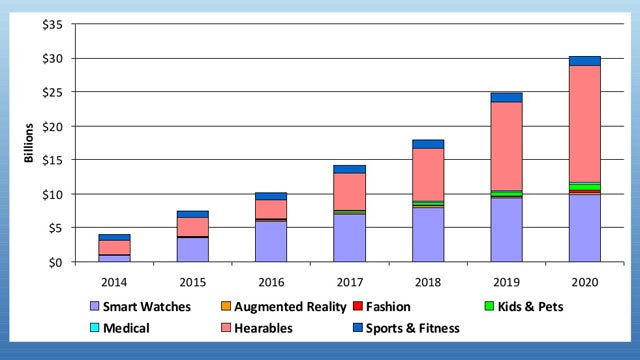 The above chart shows a segment by segment breakdown for “smart wearables,” and as you can see, hearables are on the rise. 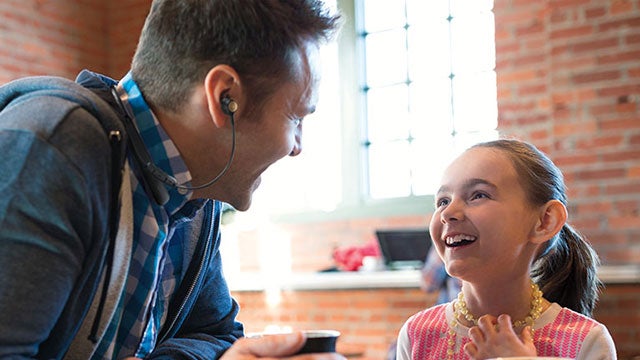 In addition to the above, one hearable that we've heard very little about, but are super excited for is the Bose Hearphones. This is what the Bose website says about them:

Also, as we mentioned above, keeping an eye on hearable related patents will also steer you in the direction that companies may be taking current (or newly developed) devices.

Ultimately though pop culture holds the future of hearable tech in their hands, and only time will tell how popular and ubiquitous this type of technology will be.

Valencell recently conducted a survey on the current status of wearables, and this may give some more insight as to where hearables can improve and how they may fare.

For now check out our recap off CES 2017 to see what's in store.