Blood is the lifeblood of the human body. It doesn’t get much more literal than that. Every single bodily function you can think of is fueled by the oxygen supplied by blood, so it’s safe to say that it’s quite important.

So when there’s a problem within the blood, whether it’s a deficiency or a disease, it can wreak havoc on almost any part of your body. And one part of the body that relies relatively heavily on healthy blood is the ear.

If you’ve found yourself on this page because you’re worried about your hearing health, then it might be a good idea to arrange a consultation with a qualified hearing healthcare professional.

How does iron deficiency affect hearing?

The inner ear comprises thousands of microscopic hair cells, and these hairs rely on the oxygen that blood transports around the body. When this oxygen is not sufficiently supplied to the hairs, they can suffocate and die, causing permanent hearing loss.

Like we mentioned, you do have thousands upon thousands of these hairs, and throughout a lifetime, some of them will die off, no matter how healthy your audiological habits may be. But when they begin to die en masse, whether it’s due to sound exposure, tobacco, or low blood quality, this is when hearing loss can start to rear its head.

How does iron deficiency impact your hearing, then? Since these hair cells rely on oxygen and not iron, surely it won’t matter? Well, the human body is a bit more complicated than that, and a deficiency anywhere can mean an overall decrease in efficiency and quality.

Iron deficiency, anemia, and your ears

In fact, your blood cells need iron to effectively store oxygen, and when suffering from a specific kind of anemia – namely “iron deficiency anemia” – oxygen can have a real problem moving throughout the body.

Blood cells need iron to create “hemoglobin,” the substance that allows the cells to retain and move oxygen around the body. If oxygen isn’t appropriately distributed throughout the body, this can lead to fatigue, dizziness, and poor diet, exacerbating the problem.

And, of course, it can cause damage to the hair cells within your ears. Like we said, if these cells aren’t supplied with enough oxygen, they’ll be asphyxiated and die, with no way to revive them.

The somewhat good news, however, is that this can almost always be remedied. Poor diet is typically the biggest cause of iron deficiency, so creating a diet around iron consumption is a good step in fixing this problem.

However, there can be unavoidable causes of iron deficiency – people suffering from celiac disease, for example, are often at risk of low iron levels. Celiac disease can impair your intestines’ ability to absorb iron, so you might be required to take a strict course of iron supplements. 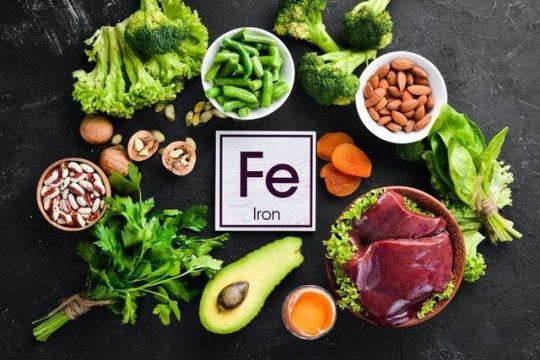 So, back to your ears. There have been several studies linking iron levels and hearing ability. One study found that people with iron deficiency were twice as likely to experience hearing loss than those with a standard level of iron.

Another study found that people with diets rich in iron had an overall better level of hearing ability than those with iron-poor diets.

If you’re anemic, or worried about your iron levels, seeing a doctor is your best course of action. They’ll be able to fully assess your condition, and put you on the right course for recovery – whether that’s diet or supplementation.

It’s all connected – the ears rely on their blood supply, and the quality of the blood is determined by, among other things, the levels of iron. If you or your loved one are anemic, or just have low levels of iron in your blood, it’s not a bad idea to keep an eye on your hearing.

Do People Lose Hearing as They Age?

When is Hearing Loss a Medical Emergency?