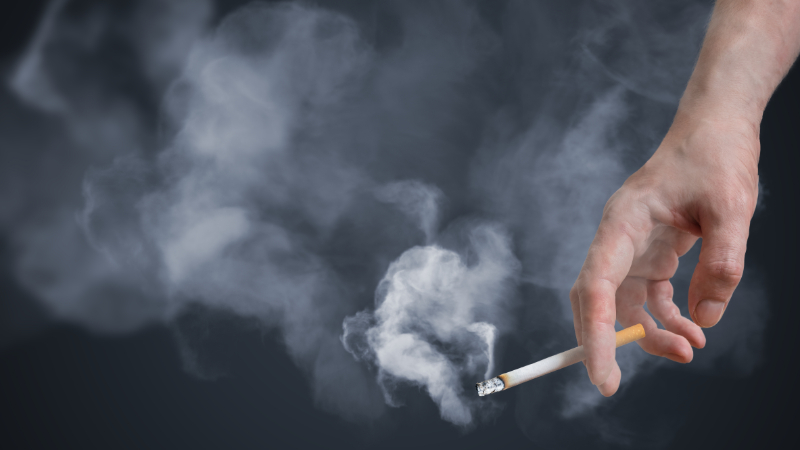 One of the biggest recent achievements of US society has been the massive drop in tobacco smokers over the past 50 years. Back in 1965, a massive 42% of Americans smoked tobacco. Over time, this has dropped to just 14%. This is an enormous step in the right direction for American healthcare.

However, as long as there are people who smoke, there will always be research into reasons why they shouldn’t. We know that smoking damages the lungs and throat, but in keeping with the theme of audiology, we’re going to look at what tobacco does to the ears.

The ears are a delicate system. A diagram will show you that there are around a dozen moving parts within the ear – and if even one of these parts is damaged or compromised, it can have severe ramifications on the individual’s hearing. Since these parts are all quite precise and fragile, it doesn’t take much to negatively impact your hearing.

If you have been exposed to tobacco extensively, a consultation with a hearing specialist could help you understand any potential problems.

What’s going on in the ear?

Despite the fact that not many people know the specifics behind how the ear works, it’s not a hugely complicated process.

Basically, sound travels by vibrating the air around us. When these vibrations hit the air inside an ear, they stimulate three small bones, known as the hammer, anvil, and stirrup. These bones then stir the fluid inside your ear. This fluid passes through thousands of tiny hair cells, creating electrical pulses that are sent to your brain. They are then finally translated into the noise you hear.

So, knowing this, what can we see happening to this process when you introduce the effects of smoking? Let’s find out.

How likely is it that smoking will affect my hearing?

Like anything related to health, you can never definitely say “If A, then B.” For instance, there is the case of Batuli Lamichhane – a 112 year-old great great grandmother who smokes 30 cigarettes a day, and has done since she was 17. There will always be outliers in sweeping medical statements, but when it comes to your health, it’s always best to err on the side of caution.

As time progresses, a frequent smoker will become more and more susceptible to auditory damage. One study found that a smoker’s age is heavily associated with loss in hearing. Age and the effects of smoking compound over time, and lead to more serious hearing loss than for non-smokers.

So smoking drastically increases your odds of developing hearing loss. Alcohol already has a damaging effect on your auditory systems, and tasks as seemingly innocuous as sitting in loud traffic or mowing your lawn can compound into serious hearing issues. With all these potential threats to your hearing, smoking is a massive addition to potential hearing problems that can be easily circumvented. 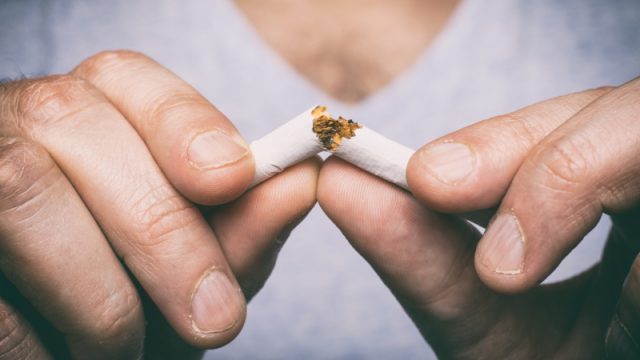 How can smoking damage my ears?

It wouldn’t be a surprise if you hadn’t heard the word “ototoxic” before. This term refers to any chemicals or drugs that are toxic to your ears or hearing. There are various medicines that fall under the ototoxic label, but more importantly, many byproducts of cigarettes are ototoxic. Primarily, nicotine is the most ototoxic chemical involved in smoking.

Unfortunately, there are some health problems whose severity outweighs the desire to maintain your perfect hearing. Some chemotherapy agents or antibiotics used for certain illnesses are unavoidably ototoxic, and should still be taken when prescribed.

If you were to begin with perfect hearing, a handful of medical encounters with ototoxic chemicals won’t do any noticeable damage. However, if you were to smoke multiple cigarettes a day, the ototoxicity of the nicotine would compile over time and start to inflict considerable – and permanent – damage to your hearing.

For similar reasons, smoking can also lead to tinnitus. Tinnitus is a consistent hum or buzz in your ear. While it is not as big of a problem as hearing loss, it is most likely indicative of tobacco’s effect on your hearing, and might be a harbinger of real hearing loss.

So it’s bad, but what physically happens?

One of smoking’s biggest body-wide effects is the impact it has on your blood. Smoking over an extended period of time can lead to thicker and stickier blood. Due to this, the blood struggles to effectively circulate throughout the body, leading to low oxygen levels in the body.

While this affects dozens of bodily functions, hearing is one of the more heavily impacted. The microscopic hair cells within the ear rely on oxygen to do their job, and when they aren’t supplied with enough, they start to get asphyxiated and die.

One of the more intangible effects that smoking has on your hearing is its impact on the brain as a whole. Nicotine interferes with the brain’s neurotransmitters (the messengers that carry information around the brain), specifically those in the auditory nerve. This can lead to a bit of confusion, when your brain thinks you’re hearing something you aren’t (or vice versa).

While there are other hearing-related repercussions that come from smoking, these two are the biggest causes for concern. If you think you may be sustaining some of these effects due to exposure from tobacco smoke, it would be worth booking a free consultation with your nearest hearing healthcare professional.

If you're worried about any effects that smoking could have had on your ears, a consultation with a hearing specialist could help you understand any potential problems.

If not for you, for others

Most things that can damage your hearing will generally only affect the person partaking in them. Loud concerts are only heard by those who elected to be in the building, and there’s no such thing as second-hand drunkenness. But smoking is a different story. 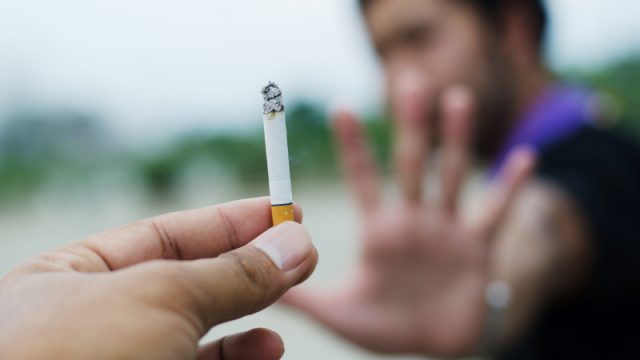 Secondhand smoke is a well known phenomenon, wherein individual A is subjected to tobacco smoke due to individual B smoking nearby. While the effects aren’t as potent as they would be if A was smoking themselves, regular exposure to secondhand smoke can have serious long term ramifications on someone’s hearing. This is especially true if the person breathing in the smoke is still in their developmental stages.

When children and teens age, almost every facet of their bodies develops – not just their height and intelligence. The hearing system undergoes a similar change as children grow up, and exposure to smoke can gravely impede this process.

A study conducted by New York University found that adolescents exposed to secondhand smoke had an 83% increased risk of sensorineural hearing loss. Sensorineural hearing loss refers to the death of those all-important hair cells we mentioned before. This condition can only be treated with a hearing aid, so it's crucial to avoid causing any smoking-related damage to nearby adolescents' ears.

It’s not just tobacco that can cause problems with your ears. Vaping, the term for smoking electronic cigarettes, has taken the zeitgeist by storm over the past couple of years. Vape pens work by heating a liquid until it evaporates (hence “vaping”), which is then inhaled. The vapor generally comes in different sweet flavors.

The problem is, these vape pens still include nicotine. And, like we said above, nicotine is ototoxic – in other words, poisonous to your ears. This means that vaping is about as bad for your auditory system as normal cigarettes.

There are nicotine-free vape pens, which sound like they solve the problem. However, since vaping culture has exploded so rapidly, it’s proven difficult to regulate and examine the contents of the different liquids. Research has found that some substances commonly used in these liquids are similarly ototoxic.

Unfortunately, due to the younger generation’s interest in these sweeter flavors, we’re seeing a rise in nicotine consumption. This means that a future rise in hearing problems among this younger generation is highly likely.

Smoking is not good for your hearing

So all in all, how does smoking affect hearing?

It’s hardly news that smoking is not a great lifestyle choice. Hopefully, we’ve given you a few more reasons to avoid falling into such a destructive trap. If you're struggling with stopping smoking, smokefree.gov is a helpful, government-trusted resource that can help you recover from this addiction.

If you smoke, have smoked in the past, or even if you’ve been in the vicinity of smokers, it would be a good idea to have your hearing checked. By using our online tool, you can find a nearby hearing healthcare professional, who can offer you a free consultation.