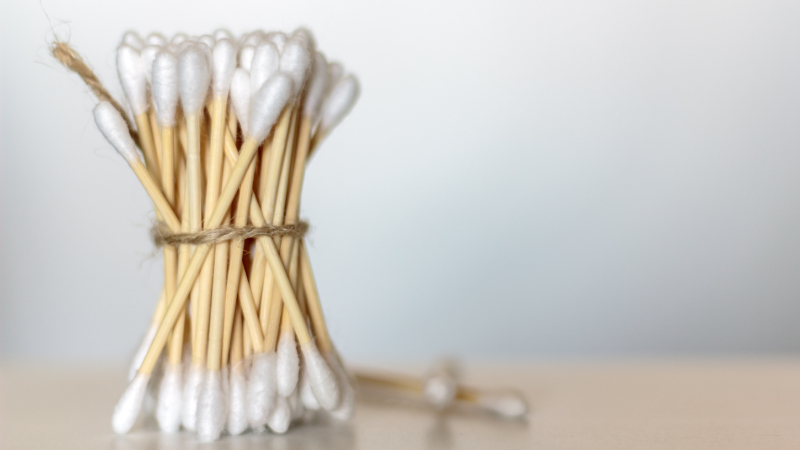 You've probably heard, “Don't put anything in your ear smaller than your elbow.” Just like you were told to “Eat your vegetables”, you probably didn't listen.

It seems like the more we are told NOT to do something, the more likely we are to do it. But, there is good reason why these sayings are repeated often.

I'm not sure whose fault it is that Q-Tips became so popular for cleaning ears. Maybe they were originally marketed that way, or maybe Doctors recommended using them before they realized the consequences.

Whatever the reason, a lot of people still think it is OK to clean the inside of their ears with Q-Tips. It's not.

Here are some reasons why it's not OK to clean your ears with Q-Tips.

1. You can injure yourself.

The skin lining the ear canal is very thin and can easily be injured just by something touching it or rubbing it the wrong way. A Q-Tip can cut the ear canal or cause a sore.

Not to mention, if you are sticking a Q-Tip too deep in the ear, you can rupture or damage the ear drum. This is very painful and can effect your hearing. Even if you are very careful when putting the Q-Tip in your ear, there have been numerous cases where an arm is accidentally bumped when the ear is being cleaned causing significant injury to the ear.

A little wax is a protection for the ears. The wax is there for a purpose and it doesn't all need to be removed. Having some wax lining the ear canal will help to keep dirt, dust, and bugs out the ears. With the ears cleaned completely, the ears lose some of their protection from the environment.

3. It can make your ears itch.

When you put a Q-Tip in your ear canal and remove it, you are likely to see some yellow or brown wax on the end of the Q-Tip. Yes, that means you did get some wax out of the ear canal, but it also means that you likely also pushed some wax deeper into the ear canal.

Even though you are removing a small portion of the wax, there is also wax that is getting pushed further in. This can cause wax to become impacted deep into the ear canal. Once this happens, you will have to see a physician to have it removed.

In addition to the above DONTS the American Academy of Otolaryngology–Head and Neck Surgery Foundation published an updated clinical practice guideline in their January 2017 issue. You can read it in full here. If you don't want to read the full medical journal article, you can read a layman's summary here.

The following was the key takeaway from their update:

“Patients often think that they are preventing earwax from building up by cleaning out their ears with cotton swabs, paper clips, ear candles, or any number of unimaginable things that people put in their ears. The problem is that this effort to eliminate earwax is only creating further issues because the earwax is just getting pushed down and impacted further into the ear canal,” Dr. Schwartz said. “Anything that fits in the ear could cause serious harm to the ear drum and canal with the potential for temporary or even permanent damage.”

So, how do you clean the inside of your ears?

The best answer is…don't. You can use a wet wash cloth to clean the outside and behind the ear, but nothing should be put into the ear canal for self-cleaning.

Some people produce more wax than others. This can depend on ethnicity, diet, family history, and other factors.

For the people who develop a lot of wax that eventually impacts the ear, they may need regular visits to the physician for an ear cleaning. This is the only “safe” way to clean the inside of your ears if needed.