The hearing aid battlefield is a fierce one. A whole host of players strategically make moves, claim territory, and advance towards their ultimate goal – to be the brand you crown as your hearing aid provider.

Oticon is one such brand, and has been for a while. Founded in 1904, Oticon is over a hundred years old, which – at least for a hearing technology company – is borderline ancient. Started by a man named Hans Demant, who wanted to help his hard-of-hearing wife, the company has grown and evolved into one of the biggest hearing aid competitors in the world.

Owned by parent company “William Demant Holdings,” Oticon is always looking to innovate within the hearing world, introducing its first lithium-ion rechargeable hearing device in March of this year.

In this article, we’ll be looking at some of Oticon’s more popular models, exploring their best features and examining how much they cost. Keep in mind that rather than selling multiple hearing aids that cover various bases, Oticon seems to focus on simply releasing one model of hearing aid at a time. While there are many Oticon models on the market, most of them are outdated, so we’ll look at their newest models.

Speak to a qualified hearing specialist and discuss hearing aid options tailored specifically for you.

Get a Free Consultation

A few other things to remember throughout the article:

We’ll try to be as comprehensive as possible, but the best way to learn about these hearing aids is from a professional. Book a free consultation with a hearing specialist near you to learn more about Oticon hearing aids.

Disclaimer: The prices listed above are estimates based on numerous online sources. These prices may vary, and should only be used as rough guidelines.

Oticon is one of the more expensive hearing aid brands out there. Remember that we’ll be looking at the best versions of each hearing aid in this article, so they’re all going to be in the higher cost range. 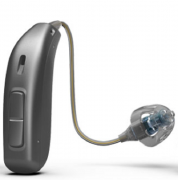 The newest of Oticon’s Oti-contenders claims to “break the limits of what has previously been possible with hearing aids.” With a hearing aid this new, sound quality is assumed – Oticon’s main selling point is the understanding of speech in noisy environments. If you’re wondering, Opn stands for “OpenSound Navigator.”

Firstly, we’ll look at the company’s BrainHearing technology. While some hearing aids offer directional hearing, which narrows in on whatever the wearer is looking at, Oticon BrainHearing scans the full 360° scope of your environment 100 times a second. This means your brain is given the sound the same way it would if you had fully enabled hearing.

Oticon’s other claim to fame is its ConnectClip. This is a small device that wirelessly connects to your hearing aid, effectively transforming it into a wireless headset. It acts as a middle man between your hearing aids and any compatible device, meaning it can be used to stream music or phone calls.

Most distinctly, the clip enables hands-free talk-back, which means you won’t need to hold the phone to talk to someone.. It can also be given to an individual who can clip it to themselves, so that anything they say is then sent directly to your headphones. This is ideal for a lecturer, or a speech at a wedding.

Any negativity regarding the Opn S is sparse. There are occasional reports about sound cutting out, or about more-than-regular tune-ups – however, these are likely very rare instances that represent factory faults, rather than a problem with the product itself.

As far as pricing goes, we’ll be honest – the Opn S delivers quite a hit to the bank account. There are four Opn S models, ranging from the small miniRITE, to the behind-the-ear Plus Power, all of which will most likely cost you around $3,000.

Oticon boasts one of the best hearing aids designed exclusively for young children. With its array of available colors and stickers, any child with hearing loss would pick an Opn Play.

Firstly – and possibly most importantly – the Play is very resistant to any punishment that it might experience at the hands of its owner. The battery is very hard to access, meaning that prying fingers won’t be able to access it, let alone lose it. It’s extremely resistant to pollen, dust, water, and all kinds of temperatures and humidity. It also has a light signalling any problems to nearby adults.

Secondly, it boasts a feature known as “Amigo FM.” Before class, the child gives the teacher a clip that streams the teacher’s voice directly to the child’s hearing aid. This allows lessons with little to no interruptions.

Nothing’s perfect – even products intended for your child. While the bright colors are fun, they are also eye-catching. This can mean that, shall we say, less polite children may target your child and try to mess with the device. There are more toned-down colors, but you can never be sure that certain less-mannered children won’t notice.

Also, since it’s intended for children, there are fewer bells and whistles. This isn’t necessarily a bad thing, as it lowers the cost and makes the product less confusing, but it also limits options for any potential buyer.

As far as cost goes, the Opn Play is so fresh on the market that a solid price hasn’t been established. However, we expect it to cost somewhere in the region of $2,300. This is only an estimate, though, and we will update this article with more relevant information once it’s available.

As you can tell from the absence of the letter ‘S,’ the Opn is a slightly less impressive version of the aforementioned Opn S. That being said, it bears mentioning as a less expensive alternative to the top-of-the-line model.

The Opn still comes with a bunch of fun features, like Bluetooth connectivity and great sound quality. It includes ConnectClip and BrainHearing technology, but both are watered down and simplified. Otherwise, it’s quite similar to the Opn S.

Since it is functionally a less advanced version of the Opn S, the Opn is also a fair bit cheaper, often coming in at around $2,500.

Oticon doesn’t branch out too much. It has a couple of models and makes them well, rather than spreading itself thin. They’re a bit pricier than the average hearing aid, but they’re well-made, and the reviews found online agree with this.

Is There a Link Between Alcohol and Hearing Loss?

What Is Sensorineural Hearing Loss?